«The human brain is a wonderful tool, genetically ready to allow human  being to get consciousness of one-self and environment, and to become able to  use space-time of one’s own existence to express one-self creatively and  harmonically, taking part in social, cultural and human evolution».

Neuropsychophysiology  – scientific discipline which integrates Neurology, Psychology, and Physiology  – was born from the studies carried out by prof. Michele Trimarchi, since 70s,  about (a) Information Physics, (b) functional differences between left and  right hemisphere, and (c) higher functions of human brain.

The essential aim  that led to the birth of Neuropsychophysiology (NPP) was to bring back mind and brain together (too long kept separated in  neurological and psychological fields), and to study higher cerebral functions  and functional differences between right and left hemisphere, to discover  ‘physiology of consciousness’, i.e. how the Conscious  ‘I’ of human being develops, that Conscious ‘I’ that allows to manage  consciously and creatively cerebral functions by integrating the dynamism of  mind with the body in its relationship with the environment.

NPP is founded on  Physics, which demonstrates that there  are no separations in the physical world as every element – from micro to  macro – generates a continuous and dynamic energy field which constantly  interacts  with other fields in an energy  exchange.
Through the study of  how various systems communicate with each other, it was found that there are no separations between external  and internal physical world of human brain, as sense organs are basically  energy transducers which convert the various energy forms to get them  identified by cerebral genetics in their physical objective characteristics.
This is the main  functions of sense organs: translating different energy forms so that brain can  perceive them, identify and become aware of them, developing a knowledge that  one can use to enrich one-self and to communicate with the external  environment.

NPP provides an  integrated knowledge of human being and behaviour (emotional, logical-rational,  creative), with nothing left to ‘chance’: every stimulus that gets to the brain  through sense organs runs on a precise pathway, so it is necessary to verify  how the various stimuli run within the two hemispheres and what they generate,  i.e. which are their favourite pathways and which are the emotional and  rational effects they generate.
A central paradigm of  NPP is the relationship between energy,  matter and information (paradigm E-M-I): nothing exists that is not information, matter and energy at the  same time.
Information gradually  modulate NPP functions, generating one-self consciousness when they are  harmonic and physiological to its development, and generating sickness,  discomfort and psychopathology when they are conflictual and antithetical to  those genetic drives that lead every human being to self-determination,  freedom, respect for one’s own and other people’s dignity.
Human brain needs to  be fed by physiological stimuli, needs to evolve, to interact constructively  with the environment, and the entire environment – internal and external –  starts from a physical base, as everything is physical. Every form of energy  constantly informs us of its own presence as our brain can measure it, and it  could measure it physiologically wasn’t it suffering from conditionings capable to distort its measuring instruments, as  exactly explained by Pavlov through his experiments on classical conditioning.  Unfortunately, by continuously submitting human being to conditionings, we  separated the functionality of the two cerebral hemispheres, left and right, we  separated the being by its ‘I’, that ‘I’ that should use both hemispheres to  continuously grow in consciousness and knowledge.
Neuroscience research hasn’t clear yet the goal of  brain, and this is what NPP focused on: goal of brain is to generate an ‘I’  who has to become absolute owner of brain itself to manage and decide his path  in life respecting one-self and environment, natural and human.

Starting from these  basics, here are NPP investigation fields:

The interrelation among  the above processes needs a continuous integration so that may emerge the  presence of the ‘I’ as the ‘pilot’ of every function of human brain. 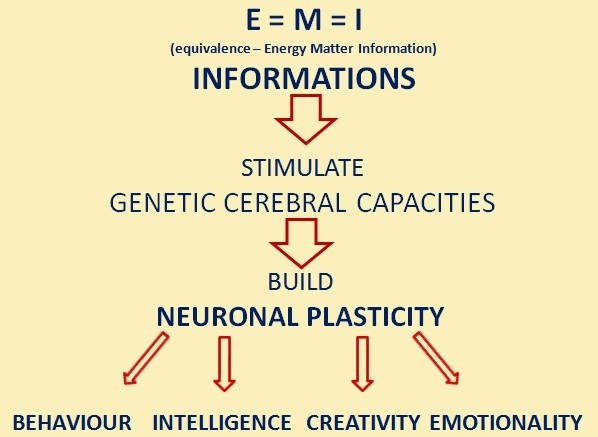