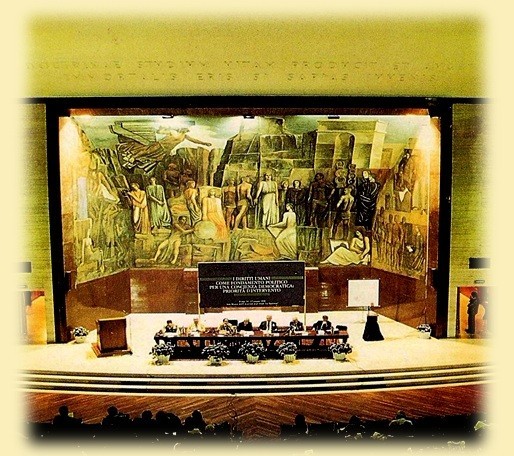 HUMAN RIGHTS AS THE POLITICAL FOUNDATION

This introduction in meant as a stimulus for all those who wish to contemplate the evolution of natural and social rights of women and men.

It was been frequently observed that human rights are often dealt with demagogically and that little is done, concretely, for their implementation. Generally only macro-violations are emphasised, which are certainly very serious and unacceptable, while little attention is paid to the so-called micro-violations that daily permeate public institutions, families and individuals, as if they do not concern human rights. In contrast, we believe that one has to work on both sides to prevent macro and micro-violations, thus attaining a true human rights culture. In fact both micro and macro-violations result because the values expressed in the Universal Declaration of Human Rights are not politically understood and embodied.

The main institution responsible for this situation is the mass-media: the press has to be humanized, endowed with a true ethical code, inasmuch as information sources are powerful and are able to condition the evolutionary development of the consciousness of all citizens. As we have repeatedly affirmed, it is not sufficient to cry out when one sees human rights violations, rather we have to intervene with adequate information for the purpose of prevention. Mass-media should not be used to “feed” conflicts, often offending the dignity of the person, but to inform citizens in such a way as to aid in the development of both the individual and collective well-being.

The title of this Meeting “Human Rights as the political foundation of a democratic consciousness: intervention priorities”, has been chosen in an effort to make these two days concretely useful. The main objective is to contribute to the removal of obstacles, such as “information pollution”, which hamper human rights implementation. If we analyse the evolution of human rights we notice that it proceeds along with Mankind’s cultural and political evolution. Therefore, we unequivocally shown us that our “mistakes” have caused wars and conflicts at the international and the inter-individual levels. This is why we insist on the need to study, in order to clearly define those attitudes which engender conflicts, bearing in mind that we currently have conceptual and scientific instruments fit for this purpose.

As we have stressed in our Opening Address, the individual is not born endowed with reason and consciousness, but rather he is born endowed with potentials and drives which are common to all Humankind. We deem that this thesis is the key for approaching the issues which will be dealt with during this meeting. We also believe that nations, basically through education, have the responsibility to promote a culture which, in the respect for human genome, allows one to satisfy those drives, such as justice, respect, freedom and dignity. I believe that these are the fundamental values to be transmitted through education. As a consequence, we need to apply an educational methodology which is able to foster the discovery and subsequent “internalization” of such values, first of all from birth to the age of majority, in that this is the developmental period when human beings attain their capacity to understand.

Values concerning justice, respect, freedom and dignity – which are potentially endless – are defined within the political and economic evolution of a society.

But what are policy and economy for, except for enabling all to enjoy equal dignity and rights, equal freedom? Who is to teach the limit between individual and social well-being?

Individual well-being must not be the detriment of the social well-being, rather it must improve it. All these questions pass through the empowerment of consciousness towards democratic values. To do so, nations have to organize educational systems which are able to foster the expression of these values. Otherwise, we cannot pretend that citizens respect others, the individual often does not respect himself, thus one of the asks of the state is to protect citizens against the damage that they can cause to themselves.

Some may say this is utopian, but we are convinced that the evolution of human rights aims to create democratic citizens who are able to manage their lives within a system where each individual can co-operate with others and express his/her own freedom, individuality and creativeness. This is, in our opinion, a true democracy.

To achieve this we can lo longer use empirical attempts. Thank to scientific progress – in the fields of neurophysiology, psychology, anthropology and education – we have at our disposal tools which enable us to know a priori what response will be evoked by a certain item of information, what will be the outcome of a given educational methodology, what are the basic conditions which foster or compromise a nation’s good functioning. One cannot ask citizens to behave in compliance with the highest democratic principles and to express their freedom, dignity and spirituality, if one does not previously enable them to solve their problems linked to the satisfaction of their basic personal and social needs. The state, therefore, must use scientific instruments in order to start solving these issues. In the meantime it must provide an educational system which is able to let people develop, from the very beginning of their lives, the capacity to understand the respect for the values of the democracy. This point is of fundamental importance for the goal of preventing deviant behaviors: in fact, knowing how the brain develops a behavior enables us to verify from the early phases of a child’s growth the information he has acquired from his environment. As a result, it is possible to single out and correct distortions that are occurring in his personality.

A scientific pedagogy is therefore needed which is able to respect the values expressed in the Universal Declaration of Human Rights. Human Rights education cannot be a mere transfer of notions, rather is has to be a tool to push the individual towards developing that critical and self-critical skill which enables him to discriminate what is right and what is wrong. When this skill is lacking, one tends to consider right all that is pleasant and gratifying, neglecting the fact that what is pleasant is often a conditioning, a useless or even dangerous element of one’s individual growth. The state has, therefore, the responsibility to enable a person to develop that “reason” and that “consciousness” cited in the Art. 1 of the Universal Declaration of Human Rights.

The individual has to be respected from birth on, thus we have to understand the deepest meaning of dignity, freedom and justice, and we need to train teachers who are able to express, and consequently teach, these values. In fact, if our daily life does not show that we have deeply internalized these principles, how can we teach them to others? Mankind’s future depends upon education. University courses shall have to provide exams on the in-depth knowledge of human rights and human dignity, and such values must reverberate through the didactic action of all professors. How can one be a “doctor” in a given discipline if one does not love the values of life and freedom that are inherent in oneself? None should obtain a degree if there is not a profound knowledge of human rights. On this condition, whatever public or private profession one performs in the future will be certainly positive, insofar as it is in the service of, and respect of, human dignity.

Conflicts are born by ignorance, never are they a result of wisdom: this should push us towards a “culture of wisdom”. Our efforts have to follow this direction and economic resources have to be employed for this purpose. We know that economy is not everything, as we can have a lesser economic well-being and greater social serenity, but we require a state and a society which integrates the objectives, one which does not give privileges to the detriment of others.

What we are stating today is the fruit of twenty years of activity carried out at CEU – Centre for Human Evolution Studies. Ius Primi Viri is also founded on CEU’s research. This scientific activity gives credence to our statements, and our “faith” in Man’s basic rights, as we have understood the “mysteries” which hampered , until now, the implementation of the Universal Declaration of Human Rights. All this makes us optimistic for the future, also because we have started to perform as consultants for international organizations and as educators in upgrading courses for teachers of all school levels, as well as for other categories definite by public offices which target the prevention of human rights violations.

The papers that will be submitted during these two days are very interesting and range from cultural relativism to educational strategies, from prevention to promotion, from ethics to bio-ethics, and so forth. The Proceedings of this Meeting will appear in a short time and we intend on disseminating them as widely as possible in order to share with others what we are going to build in favour of all Mankind.

I wish to invite the participants to a fruitful debate, bearing in mind that we feel we are responsible – because of the scope of the subjects of this meeting – towards all those who are awaiting faithfully the results of our work. I thank you and wish you a successful meeting.