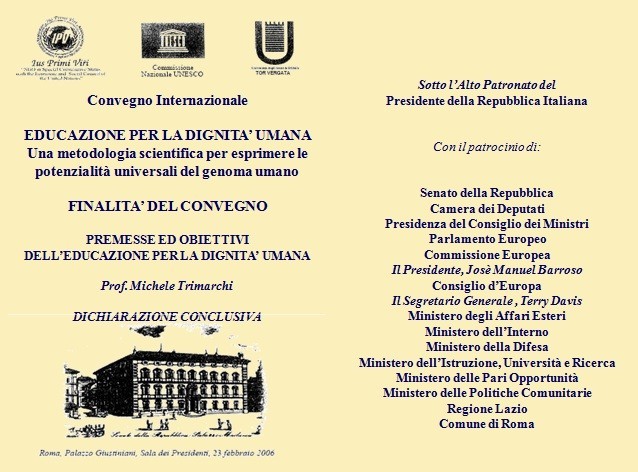 an International Association working for Human Rights Education since 1993,

in consultative status with the ECOSOC on the recommendations made at the International Conference organized to implement the World Programme of Human Rights Education adopted in 2005 on “Education for Human Dignity:

A Scientific Methodology for Expressing the Human Genome's Universal Potential”

The Secretary-General has received the following statement, which is being circulated in accordance with paragraph 30 and 31 of Economic and Social Council resolution 1996/31 of 35 July 1996.

Around 200 participants (Educators, Institutions, Lawyers, Judges, NGOs, diplomatic representatives gathered at the Italian Senate to attend the International Conference on “Education for Human Dignity” to contribute to the implementation of the “World Programme of Human Rights Education” and enhance the debate of the High Level Segment of the ECOSOC of 2006 on enabling environment for sustainable and productive employment. They adopted the following Declaration in the spirit of human rights and sustainable development to promote Education for human dignity and achieve the MDGs.

Education will so enable human beings to control their lives and evolution towards harmonization integrating values that enlightened people left as an inheritance to humankind.

Signed and presented on behalf of the participants

in the International Conference

The President of IPV